ENRICHING THE LIVES OF YOUNG PEOPLE THROUGH THE ARTS

Youth Theatre Interactions, Inc. (YTI) provides professional instruction in the performing arts to Westchester County youth. With the support and participation of their parents, YTI nurtures creativity and pride in accomplishment while fostering discipline, confidence, and critical thinking in young people. Empowered by these attributes, our youth will become positive contributors to society. Furthermore, they will possess the skills necessary to proceed into the professional arts community.

Jimmy Hill’s 60-some years of playing saxophone began when he made off with the horn his older brother kept hidden in a closet. Hill started gigging professionally at clubs in the ’40s while still in high school, but his recording career didn’t really kick off until his senior years, when he began a superb series of self-produced releases featuring his working band. Hill was strongly identified with the tri-state scene of New York, New Jersey, and Pennsylvania, where he won great respect for his educational endeavors. The reed player founded and directed Youth Theatre Interaction, Inc., an after-school performing arts program for Yonkers and Westchester area kids. He was also associated with bandleaders such as singer Etta Jones, to whom he dedicated a fine tribute album, saxophonists Sonny Stitt and Houston Person, organists Gloria Coleman and Dr. Lonnie Smith, pianist Cedar Walton, and guitarist Joe Puma. Hill learned to play by ear, his head literally in a bucket — as in the Bucket, a jazz jam club that had the same status in Mt. Vernon, NY, as Minton’s did in the Big Apple proper. While Hill claimed to have never taken a “formal” lesson, he did study with players such as Mike Mainieri and Sal Mosca, absorbing some aspects of the difficult Lennie Tristano school even though Hill never learned to read music. That didn’t keep him out of important venues such as Sweet Basil in New York City, and Hill also performed at a variety of festivals and concerts in the jazz mecca as well. In the ’90s, Hill focused on his own group and at least on his recording dates had the benefit of a consistent lineup. Hiroshi Yamazaki on piano, Fred Hunter on bass, and Joe Ragusa on drums filled out the group, which also sometimes featured vocalist Glenda Davenport. His 2001 release entitled Friends is dedicated to Etta Jones, with whom Hill also recorded on her album entitled Don’t Go to Strangers. Hill’s energetic run came to an end on June 9, 2004 when the saxophonist passed away as a result of emphysema. He was 76.

Mr. Johnson has 50 years of experience as an actor, writer, director, mime, and artistic director in professional youth and community theater. A former student of Tony award winner Wilford Leach and Obie award winner Marvin Felix Camillo, as well as “Players Workshop” founder and director Clay Stevenson and Shirley Kaplan he holds an MFA in Theater from Sarah Lawrence College and is a William Henry Danforth scholar in educational theater. He co-founded Youth Theater Interactions, Inc, with James P. Hill and Turhan von Brandon in December of 1973 and served as it’s founding artistic director until 2003. He is a five-time Lincoln Center for the Performing Arts director including directing productions at Alice Tully Hall and Lincoln Center Out of Doors all of which were productions presented by Youth Theatre Interactions, Inc. Mr. Johnson was the Head Scriptwriter for “Scoops Place” a segment of the PBS and NBC television series “Infinity Factory”. He has also been published in “Ebony Jr.” magazine. Mr. Johnson has been awarded the Keys to the City of Detroit and a High Commendation from the city of Los Angeles for his work in theater in those cities.  Founder and artistic director of The YTI Mime Time Players (1976-1992), Mr. Johnson’s company was the first professional mime company composed entirely of African-American and Latino mime artists ever to perform in concert at Lincoln Center for the Performing Arts and conduct national tours. In 1988 The YTI Mime Time Players were admitted into the Mid-Atlantic States Touring Consortium of the National Endowment of the Arts becoming the first African-American Mime company to be so honored. Mr. Johnson has taught theater and mime in South Africa, the Caribbean (Jamaica and Barbados) and in Hong Kong.

In 1989 he founded the “Intimate Realities” Teen Touring Drama Company of YTI which has now continued to produce touring presentations for the past thirty years and he continues presently as the Director of this Company. In 2015 he directed the New York premier of “American Moor” written and performed by Keith Hamilton Cobb who won the 2015 Audelco award for “outstanding solo performance” for his role in this production. In 2016 Mr. Johnson was inducted as “A Living Legend in the Arts” in the City of Peekskill by that city’s board of education for his work in drama  with Peekskill’s student population.

Currently, Mr. Johnson continues to serve with Youth Theatre Interactions, Inc. on their drama faculty and serves as “guest faculty” for the Sarah Lawrence College Theatre Outreach department. He is also the Elementary,  Adult and Teen Theatre Director for the Theodore D. Young Community Center in Greenburgh, New York  where he oversees the TDYCC Adult Acting Company and the TDYCC Teen Acting Company The New York State Council of the Arts Independent Review biography states of Mr. Johnson, “… Mr. Johnson is one of the most highly sought-after teachers of theater in the Hudson Valley region of New York State.”

In 1973, Hill and Johnson along with co-founder Turhan Von Brandon sought non-profit status for their program and renamed it Youth Theatre Interactions, Inc. (YTI), a performing arts school providing instruction free of charge to the youth of Yonkers. Von Brandon’s artistic background enabled him to help enrich the YTI curriculum significantly to include photography, training in lighting design, sound, and stage management. He began painting and drawing around 1952, and photography in 1966. He has received local, state, and international awards for photography and the technical quality of the photographic print. He began the formal study of painting and drawing at the Hudson River Museum in Yonkers New York around the age of eight and continued his art studies at Howard University in Washington DC., where he also took up photography. He continued his study of photography in the Army while stationed in Wurzburg Germany with a local professional photographer, and later with the New York Institute of Photography. Some of Von Brandon’s photographs and digital/computer paintings can be found at https://fineartamerica.com/profiles/turhan-von-brandon?tab=artwork. 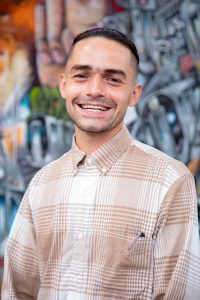 Brooklyn Demme is a storyteller who pursues community healing through creative arts and education. As a filmmaker, Brooklyn began learning from his father Jonathan at 16, while filming a documentary project with survivors of the natural and social disasters associated with Hurricane Katrina. His work has grown within successive film projects created alongside the Ramapough Lenape Nation, in addition to various other community groups throughout Rockland County and NYC.As a community organizer, Brooklyn’s work began during his studies at Oberlin College, when he co-founded the One Town Campaign: a community movement which addressed the college’s practices of systemic racism and exclusion of local community members. The work of their coalition resulted in substantive reforms in the college’s security policies. Now, he is thankful to pursue similar ends of unity and evolution within the Rockland People’s Panel on Policing, and as a steering-committee member of the Rockland Coalition to End the New Jim Crow.As an educator, Brooklyn began with sharing the joy of filmmaking with young residents of the city of Oberlin. His work towards increasing people’s access to desirable knowledge and skills would expand to include co-facilitating college courses within a men’s prison, and most recently, offering English-language instruction within an Achuar (Indigenous) community of Ecuadorian Amazonia.After years of media consulting for nonprofits in NYC, he is ready to incorporate the skills he’s learned across the fields of community organizing, education, and the arts, in service of the people of Yonkers.As Interim Executive Director of Youth Theatre Interactions, Brooklyn seeks to uphold and meaningfully contribute to YTI’s rich tradition of community-based self empowerment through creative expression.

Thank you for supporting YTI